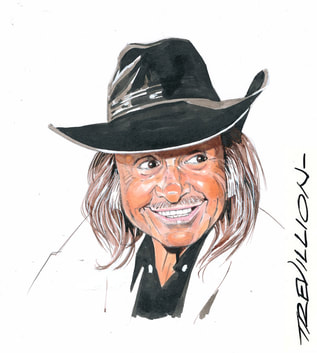 Born in 1934 in London, just a 'corner kick' away from his beloved Tottenham Hotspur Football Club, Trevillion's extraordinary artistic talent was discovered and nurtured at a very young age. Encouraged by family, school teachers, and most notably Sir Winston Churchill and HRH Prince Philip, the Duke of Edinburgh, he pursued a ground breaking career in the world of sporting art which has seen his original work in print worldwide and on display in museums around the world (FIFA Museum - Zurich, National Football Museum - England , Linzi Football Museum -. China)

It was the inspirational words and actions of the Duke of Edinburgh, HRH Prince Philip in 1952 when they met at the Mansion House Medal Awards which inspired an unshakable belief that everything is possible and young children should be supported and encouraged to draw and express themselves through art and in recent years Trevillion has performed hugely successful art workshops and motivational talks as guest speaker in primary, secondary schools and theatres.

"Treat every obstacle as a hurdle to be overcome"  were the inspirational words of HRH Prince Philip and this followed with a letter from Buckingham Palace from praising Trevillion for his artwork - a portrait the young artist had drawn at the Mansion House.  The letter  appeared in the National Press and launched Trevillion’s sporting career in the ‘Sporting Record’ with drawings of the England and Australian cricketers for the 1953 Coronation Ashes.

Inspirational words of Sir Winston Churchill in 1955 "Every NO takes you one step nearer a YES!"  Churchill had summoned Trevillion to meet him regrading his 'smiling' portrait honouring the great man's 81st Birthday. Churchill liked the portrait very much and signed it.  It remains the only signed 'smiling' portrait in existence.

Trevillion's natural gift in taking the medium of  pen and ink to its limitations and beyond, has been best described by author and highly respected art historian Susie Hodge MA FRSA, "Paul adds washes of vibrant colour.  Nothing is laboured or overworked.....not a static photographic rendition, but a free fluid image that not only captures movements, form and mannerisms, but spirit and power....Paul Trevillion is the Pele of Sporting Art."

As a schoolboy Trevillion was driven to achieve his dream of becoming a professional artist, so he approached the editors of the highly popular comic publications  ‘Eagle’ , ‘Tiger’ and  ‘Roy of the Rovers’ .  His talent was  recognised, and commissions to create art features and comic strips quickly followed.

Trevillion’s break through into the national press, came in the Sunday People in 1957  with a series devised and illustrated by Trevillion called ‘Hey Ref!’  which later Trevillion renamed ‘YOU ARE THE REF’.  It went on to feature in 'Shoot!' and then 2006-2016 weekly in the Observer and Guardian online, and in 2012 'You Are The Ref' also became a  permanent interactive exhibit at the ‘National Football Museum’ in Manchester.  The 'You Are The Ref' and  (spin off) cricket  'You Are The Umpire book have also proved best sellers.

From the  1960’s onwards, Trevillion’s dynamic art featured in almost every national newspaper in the UK.  Acknowledged as  'The best black & white artist in the business', Trevillion devised and illustrated instructional based art for the Daily Mirror, Daily Express, The Sun, Daily Mail, The Telegraph, The Times, Sunday Times, Guardian and Observer.

In the 60's Trevillion was also the inventor of the 'Pencil Grip'. (Now used today by many top golf tour professionals).  His 'split hand' putting method using the Pencil Grip inspired book publications, putters and a 'Never Miss a 4Ft putt tour' in the USA.  As an artist and author he has had over 20 books published worldwide, including the Peter Alliss instructional book, ‘Easier Golf’ which was reprinted 10 times in a 20 year period, world famous illustrated golf feature: ‘GARY PLAYER GOLF CLASS’ which appeared in over 1,500 newspapers worldwide and became the largest syndicated sports feature in the world.

In the 1990's Trevillion worked extensively in the USA creating artworks of the stars of the NBA, NFL, MLB, NASCAR and WCW Wrestling.  He also worked alongside veteran Disney senior animator MILT NEIL (Snow White, Pinocchio, Dumbo, Bambi) who told him that it took 20 drawings to produce the movement that Trevillion captures in one!

Trevillion's love of sport has driven his artistic career from Boxing to Football, NFL to Golf.  He has worked with sporting stars such as - Gary Player, Peter Alliss, Lee Trevino, Sugar Ray Robinson, Oscar De La Hoya, Paul Gascoigne, Gary Lineker, George Best, Pele and so the list goes on.  Over many World Cups, Trevillion has worked on commercial projects for Umbro, Adidas, Budweiser, Hershey, Fuji etc.  In 2017 he created ten original action paintings of PELE for the Snickers 'Play Like Pele' campaign, and featured alongside Pele in a specially commissioned advert.

In 2010 Trevillion  was commissioned by the PROFESSIONAL FOOTBALLERS ASSOCIATION, in conjunction with the Football Association, to bring to life a mental health booklet 'THE FOOTBALLERS' GUIDEBOOK'  distributed to every footballer who plays professional football.  A groundbreaking concept, using Trevillion's  'comic art realism' artistic work to sensitively discuss mental health issues affecting professional footballers.

In 2014 the FOOTBALL ASSOCIATION commissioned Trevillion to create original 'moving art' for a series of 'SEE IT.  HEAR IT.  REPORT IT." animation films to help report discrimination,The animated films were designed to help eradicate discrimination from professional and grassroots football, and includes the 'Kick It Out' app.

Following his highly successful 'Master of Movement Art Exhibition' at the Strand Gallery, London in 2014, Paul Trevillion co-founded the "Football Walk of Fame" which launched in 2016 at the National Football Museum in Manchester.  25 bronze plaques with Trevillion art images of footballing legends embedded in a permanent display outside the museum.  The launch also coincided with a one year exhibition of Trevillion sporting art.

Trevillion has been happy to donate original artwork and prints for many worthy charitable causes including the Make-A-Wish Foundation, Cancer Research, Bobby Moore Cancer Fund, The Duke Of Wellington Regiment, National Football Museum etc.
​
Trevillion's  motto to young aspiring artists:  "Follow your dream.  Never allow anyone  to say - you can't achieve it.  You have to be the one who believes in YOU more than anyone else."  ​ 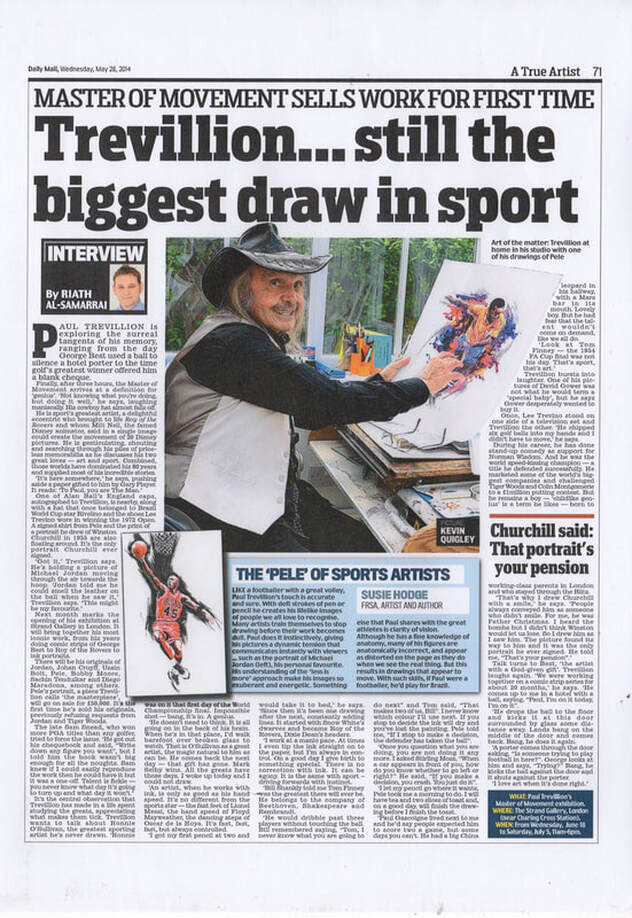